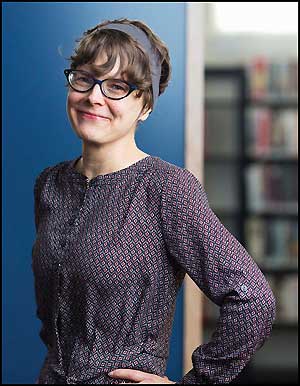 Sophie Maier, the Louisville Free Public Library’s Community Outreach Coordinator at Iroquois Library, has been named a 2017 “Mover and Shaker” in the library industry by the national publication Library Journal.

In its March issue, Library Journal recognizes 52 outstanding professionals dedicated to making their libraries—and communities—stronger. Sophie Maier was selected for this honor for her exemplary service in acting as a “Change Agent,” connecting Louisville’s immigrant and refugee communities with the library and its services.

LFPL Director Jim Blanton noticed Maier’s longtime commitment to making the library accessible and nominated her for the award. “Sophie appears to know and be known by nearly everyone in Louisville, particularly within the international community,” he said. “To people from around the world who now call Louisville home, Sophie is the face of LFPL.”

Maier, who has worked for LFPL since 2002, has an impressive track record. Knowing all the barriers that exist to newcomers to our city, she works hard to meet immigrants and refugees where they are: refugee resettlement agencies, public assistance offices, workplaces, churches and mosques, shopping centers, and seemingly every international festival year-round At Iroquois, she creates innovative cultural programs—from Arabic literary salons to cultural showcases spotlighting Africa—that empower the city’s numerous international populations. Her cornerstone program is a weekly English Conversation Club (ECC) started more than a decade ago, where English language learners meet with local volunteers at the library to receive help with language, homework, employment, and cultural adjustment. Maier’s extremely popular ECC brings together refugee, immigrant, and native Louisville participants from all types of linguistic, religious, and socioeconomic backgrounds.

The 2017 Movers & Shakers were selected by the editors of Library Journal. Each of the Movers & Shakers will be prominently featured in the March 15th issue of Library Journal and celebrated at a special reception in June during the American Library Association’s annual conference in Chicago, IL. The print feature’s companion website is sponsored by OCLC and available at http://libraryjournal.com/movers.