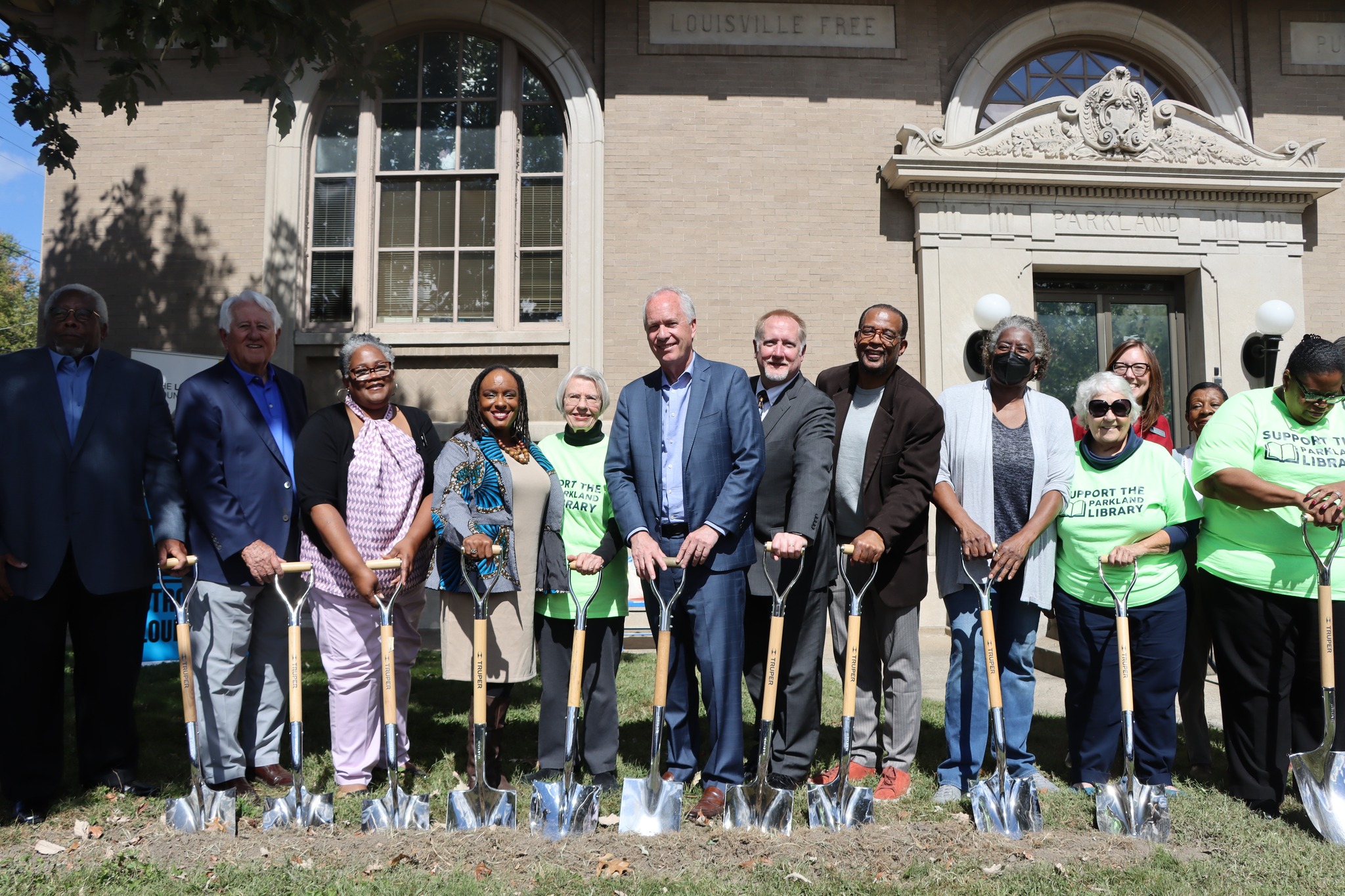 – After more than three decades without a library to call its own, the Parkland neighborhood is one step closer to having library services within walking distance. Today, Mayor Greg Fischer, Library Director Lee Burchfield, and Councilwoman Angela Bowens joined the Library Foundation and members of the community to break ground on a $2.7 million renovation and expansion project to restore library services to the historic Parkland Library. Located at the corner of 28th St. and Virginia Ave., Parkland Library originally opened in 1908 as one of nine libraries in Louisville constructed with grant funding from industrialist and philanthropist Andrew Carnegie. The branch closed in December 1986 due to budget cuts.

“We’re thrilled to be writing the next chapter of the Parkland Library and for this space to join the other libraries throughout our city that have been constructed, opened, or updated throughout the 12 years our administration has put a premium on lifelong learning for all our residents,” said Mayor Fischer. “Thank you to our library lovers, employees, and supporters for their continued dedication to bringing first-in-class library and education services to our community.”

The Parkland Library project will include a renovation of the original 6,000-square-foot library, as well as a modern addition to the rear of the building. Once complete, the facility will be fully accessible and will return a full array of library services to the nearly 5,000 residents of the Parkland neighborhood. Amenities will include books and materials, computers and printing services, public meeting rooms, a modern makerspace, and free programming for all ages.

“A physical library serves as an anchor to its neighborhood, creating a safe place where people can come together, exchange ideas, and strengthen the bonds that weave together a true sense of community,” said Library Director Burchfield. “To be able to reopen one of our city’s first libraries and restore vital library services to the Parkland neighborhood—after more than 30 years—is tremendous.”

The total price tag for construction, books, computers, and furnishings is estimated at $2.7 million, with a total of $1.3 million allocated by Metro government through capital and

American Rescue Plan funding, and an additional $1.4 million to be raised through private donations to the Library Foundation.

“The Library Foundation is excited to join our Parkland neighbors in their efforts, by raising additional funding. It will take a community effort to fill the building with the resources needed for a new generation of Parkland Library patrons. People can learn how to get involved at LFPLFoundation.org,” said Library Foundation Executive Director Chandra Gordon.

“Sidney Sheldon said it best, ‘Libraries store the energy that fuels the imagination. They open up windows to the world and inspire us to explore and achieve, and contribute to improving our quality of life.’ I’m excited to be a part of this groundbreaking, which includes much needed renovations to this beautiful and historic library,” said Councilwoman Bowens (D-1).

“Growing up in Parkland, we heard stories about the library. I’m proud to see it finally coming back after all these years. Louisville has world-class libraries and Parkland residents deserve better access to them,” added Councilman Jecorey Arthur (D-4).

“The groundbreaking for the Parkland Branch Carnegie Library renovations has been a long time coming, and I’m grateful this day has finally arrived,” said President David James (D-6). “I know the community is eager to have this wonderful amenity back in the neighborhood.”

The design team will include JRA Architects of Louisville, MKSK of Ohio, and LFPL staff. The Parkland Library is estimated to open in late 2023.

Louisville Free Public Library connects the residents of Louisville and Jefferson County to knowledge and information at our library locations and on the web at LFPL.org. Come on in, the whole world’s inside.

Wishing you volumes of fond memories this holiday season!