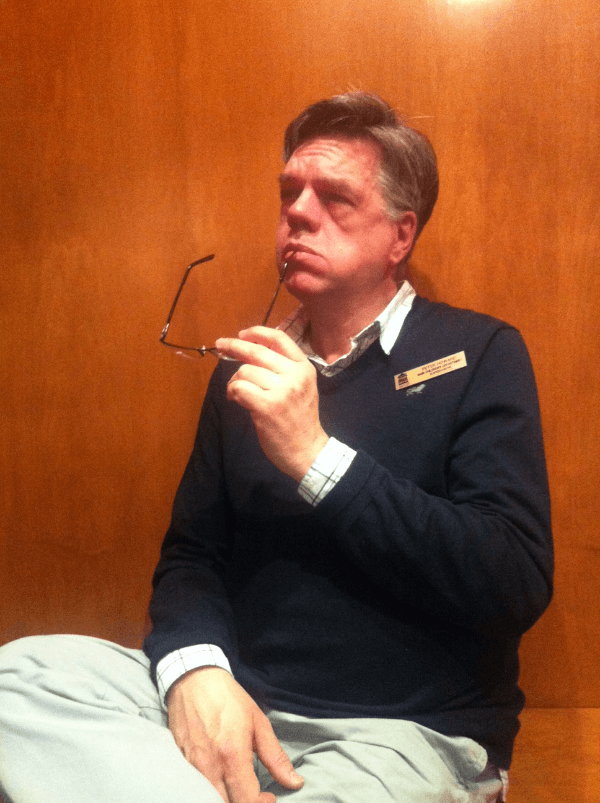 Your support helps library staff continue their education by providing scholarship assistance for employees seeking a mater’s degree in library science. The Library Foundation of Louisville would like to introduce to you scholarship recipient, Peter Howard.

Peter Howard, Children’s Department Supervisor at LFPL’s Main Library, was selected in 2010 to serve on the Newbery Committee—a group of 15 children’s librarians from across the country who read and evaluate hundreds of children’s books submitted for one of the most highly coveted awards in children’s literature.

Howard recalls, when he was invited to join the committee, he almost passed on the opportunity.

“I don’t think I’d want to be on a committee like that. It just sounds like a lot of reading!” It’s an easy thing for the library scholar to laugh about now, but he was right to take his time to think about such a huge commitment. “You have to commit to attending the two annual conferences, one in the winter and one in the summer over two years. At the first conference you go over all the rules and procedures and how to look at the books from a critical point of view.”

No social life for two years, plus four-hundred-fifty books, plus a really good UPS delivery guy equals getting to say you were on the Newbery Committee. Who wouldn’t want that on a list of accomplishments?

Howard’s relationship with the library began as a young boy visiting the New Albany Public Library during the summer months. “I just remember loving books. They also had an audio/visual room where they had record players with ear phones so we could sit and listen to records and check them out. And I remember the Summer Reading Program and how much fun it was.”

You may be surprised to learn that the majority of Howard’s education prior to his library science degree is actually based in theatre, which comes in handy when dealing with children and teenagers.

During his undergrad days at Indiana University Southeast, Peter landed a job in the genealogy department at the public library, where he first learned of the career possibilities of becoming a librarian. After double majoring in philosophy and speech & theater as an undergrad, he obtained his first master’s degree at Indiana University Bloomington in theater & drama while holding a part time job in the chemistry library.

After school Peter went to work at the Charlestown library in Indiana. Not long afterward a good friend suggested that he apply for a children’s library assistant position at the Highlands-Shelby Park branch of LFPL. “That’s why I loved it so much—I was able to do puppetry and storytelling. It really was a good fit because it gave me the security of a steady paycheck, and I was still able to use my creative energy and theater training.”

Because he was still heavily involved in theater, Howard waited a few years before applying for a Library Foundation scholarship for a master’s degree in library science. “And then I decided it was time to go to library school and take advantage of this opportunity. It really prepared me for the Newbery award and looking at children’s literature and becoming more knowledgeable about children’s literature in general. Those courses directly helped me with my job.”

Howard now has a long history working with Louisville’s young readers. Formerly the Teen Services Supervisor at The Underground, located on the lower level of the Main branch, Howard can speak at length about the differences between working with teens and children. “Really, it’s about building the relationship. It’s about letting the teens know the library is the place for them to come. That they’re welcome, that the librarian is there to help them. I mean, we can listen to them, we can talk, we can give them a place where they can express their ideas, gaining their trust so that they see the library as an important part of their lives.”

From theatre to working in college libraries, to children’s services and his time serving on the Newbery committee, Howard is now one of the many reasons teens, children, and their families frequent the Louisville Free Public Library. Cultivating informed and educated staff helps LFPL best meet the needs of our diverse community.

When asked what he would say to someone considering a gift to the Library Foundation, Howard responds, “If education is important to you, if having a society that is educated, that has resources available to everybody, if the economy is important to you and that people find jobs—these are all things the library can provide and that the Foundation helps the library provide. Not just the scholarship program, but also books and materials, and the Summer Reading program. A lot of people may not realize that.”