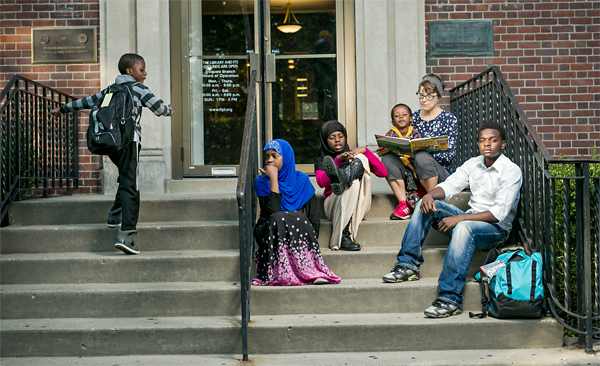 Huda Kutmah doesn’t personally know what it’s like to be a refugee. Her parents left Syria because her father wanted to continue medical school in the U.S., and she’s lived in Louisville, KY, most of her life. But when Kutmah, now a teenager, heard about Syrian refugees coming to this country, she wanted to help.

She’s involved in gathering donations for the families, helps them adjust to their new surroundings, and gives ongoing support to the newcomers after the services provided by the local resettlement organization end. A lifelong library patron, Kutmah helped out at a Syrian Showcase at the Louisville Free Public Library’s (LFPL) Iroquois branch, and served as a library ambassador when students visited from New York City. She and other teens also volunteer at cultural events and “conversation clubs” to help the refugees learn English.

“We are like their family,” says the college freshman, who is attending the University of Cincinnati. “We are the ones that stay with them longer than three to six months.”

Across the country, libraries are helping refugees stay in touch with their own culture while also supporting them as they find their way into U.S. society. Whether they provide books in their native language or offer free activities, libraries are making refugee children feel welcome and giving them opportunities for positive involvement.

“Most of them are living in really rough neighborhoods and searching for ‘what is my new identity?’” says Sophie Maier, the immigration services librarian at LFPL. Parents, Maier says, often expect their children to be a bridge to their new community, but at the same time don’t want them to “take on the attributes” of American culture. She brought together a cadre of teen volunteers who are refugees and immigrants, giving them a chance to learn leadership skills. Maier is also thoughtful about informally pairing certain teens with others who are going to talk about preparing for college—what she calls “secret mentoring.”

While Maier has had success building up a variety of programs for these teens, such as guitar and chess classes, she says that it’s a challenge to find books for children in less common languages such as Karen, spoken in areas of Burma. When she does, sometimes other library staff members question why she’s buying them.

“It’s such a learning curve for everyone,” she says.

Despite COVID-19 closures, Louisville Free Public Library Finds a Way to Help in the Fight Against the Coronavirus