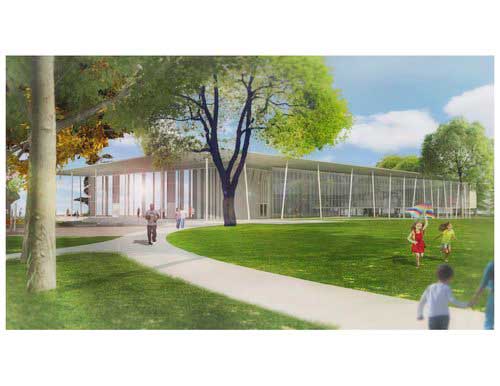 Construction of the Northeast Regional Library is officially moving forward, Mayor Greg Fischer announced during his budget address April 27, 2017. Fischer included funding for the library in his annual budget, presented to the Metro Council for review.

“For all our families and children to thrive, not only do they need housing they can afford, but be connected with resources, education and opportunities,” Fischer said. “And one of the most effective vehicles for those connections is the Louisville Free Public Library.”

Fischer noted the timing of this project is crucial — the Louisville Free Public Library has been approved for a 20-year, $4.1 million debt-service grant from the state to make this library a reality. “We must take advantage of this opportunity now to leverage the state money, or not only risk losing the grant, but compromise any chance of future awards,” Fischer said.

The Northeast Regional Library will complete the regional library vision of the Library Master Plan approved by the Metro Council in 2009. Southwest Regional opened in 2014, and South Central will open in the summer of 2017.

Located at the intersection of New La Grange Road and Whipps Mill Road, near the Northeast YMCA, the Northeast Regional Library will be a park-like setting on land currently owned by the city. With 40,000 square feet, the new state-of-the-art facility will replace the much smaller Westport branch housed inside Westport Middle School.

The Northeast Regional Library will be funded through a public/private partnership that includes funding from the state and metro governments, alongside funds raised by the Library Foundation. The Library Foundation conducted successful capital campaigns to support the Southwest Regional and South Central Regional libraries as well.

During his announcement, Fischer also thanked Councilwoman Madonna Flood for her support of the new South Central Regional Library, which enabled the library to add the Collider Artist-in-Residence Program.

The mayor’s proposed budget will now be reviewed by Metro Council members. Voice your support for this project by contacting your council representative — find that information here!