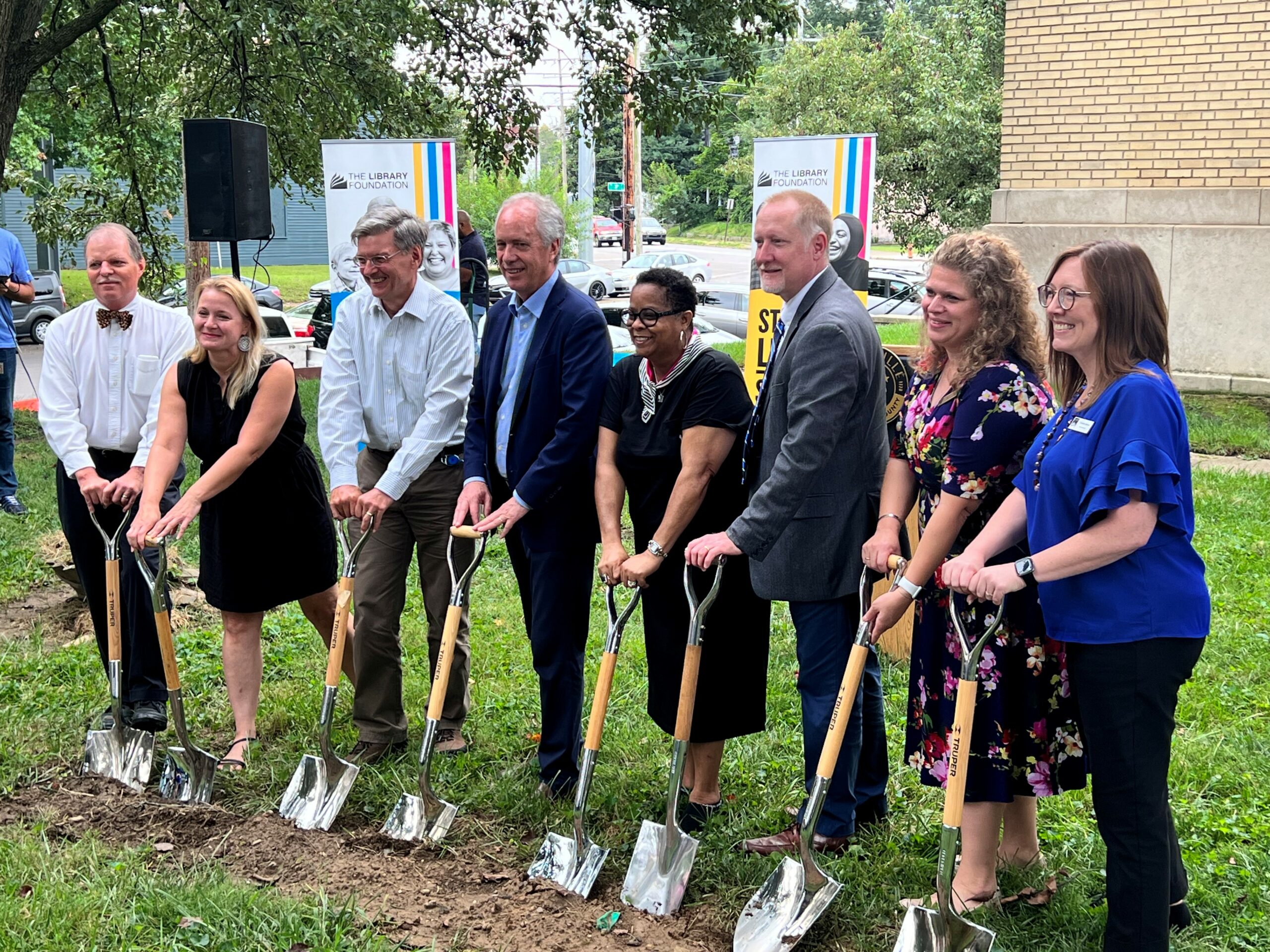 LOUISVILLE, Ky. (September 6, 2022) – With shovels in hand, Mayor Greg Fischer, Library Director Lee Burchfield, District 5 Councilwoman Donna Purvis, representatives from the Library Foundation, and members of the community officially broke ground today on the much-anticipated expansion of the Portland Library. This $5.5 million project includes a renovation of the original 6,000-square-foot historic Carnegie-built library located at 3305 Northwestern Parkway, as well as a modern 4,500-square-foot addition. Once complete, the Portland Library will be fully accessible and will feature an expanded collection of books and materials, more computers, separate children’s and teen areas, new comfortable seating, and a public meeting space.

“We are thrilled to write the next chapter of the wonderful Portland Library, which opened in a different building more than 100 years ago, with a project that will make the space more accessible and make it possible to get more books in the hands of our city’s lifelong learners,” said Mayor Greg Fischer. “The Louisville Free Public Library has been a cornerstone of our community for so long and thanks to the outstanding efforts of our library employees, volunteers, donors, and library lovers, we have laid a foundation of success for another 100 years.”

The third oldest branch in the Louisville Free Public Library system, the Portland branch was originally founded in 1905, with the current building opening in 1913. It is one of nine libraries built in Louisville with funding from philanthropist Andrew Carnegie near the start of the twentieth century.

“Andrew Carnegie famously once said that ‘a library outranks any other one thing a community can do to benefit its people.’ This historic library, that Carnegie helped build more than a century ago, has continued to evolve and adapt to serve the needs of the Portland community,” said Library Director Burchfield. “Now thanks to funding from Metro Government, the American Rescue Plan, and the Library Foundation, the residents of Portland will have a modern, expanded, accessible library that they will benefit from for generations.”

The total price tag for construction, books, computers, and furnishings is estimated at $5.5 million, with a total of $2.8 million allocated by Metro government through capital and American Rescue Plan funding, a $1.2 million state construction grant awarded from the Kentucky Department of Libraries and Archives, and an additional $1.5 million to be raised through private donations to the Library Foundation.

“The Library Foundation is excited to be a part of this project.  When our neighborhoods thrive, our city thrives,” said Library Foundation Executive Director Chandra Gordon. “We invite everyone to join us in supporting the Portland Library.  Visit LFPLFoundation.org to learn how you can help.”

The design team will include JRA Architects of Louisville, MKSK of Ohio, and LFPL staff. The Portland Library will remain open during the early stage of construction, with an estimated completion of fall 2023.

Louisville Free Public Library connects the residents of Louisville and Jefferson County to knowledge and information at our library locations and on the web at LFPL.org. Come on in, the whole world’s inside.

The Library – at the crossroads of knowledge and know-how. Visit www.LFPL.org to learn more.