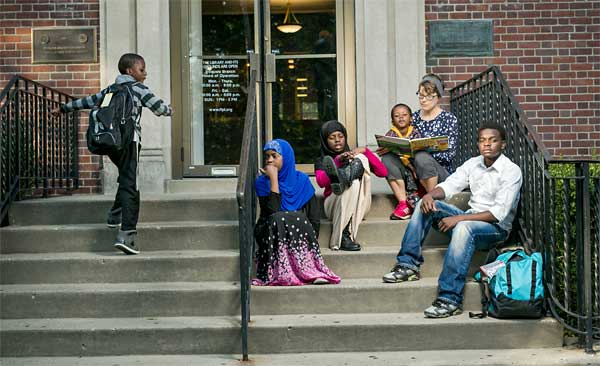 The Louisville Free Public Library is being recognized for its work with immigrant families, especially celebrating and promoting their cultural traditions.

LFPL’s Iroquois Library is a finalist for the National Arts and Humanities Youth Program Award, the nation’s highest honor for after-school and out-of-school arts and humanities programs. The NAHYP selected 50 finalists from 342 applications, distinguishing Iroquois Library as one of the top arts- and humanities-based programs in the country. The winner will receive a $10,000 one-time grant and an invitation to accept the award at a ceremony in Washington, DC.

“It is such an honor to be one of a small group of finalists,” said LFPL Director Jim Blanton. “I’m so excited to see the Iroquois Library’s efforts recognized this way.”

Maier launched the first English Conversation Club nearly 15 years ago to support English language acquisition for immigrants and refugees at the Iroquois Library. Since then, English Conversation Clubs have been offered throughout the Louisville Free Public Library system. Maier recognized that language is best learned not just through immersion but through conversation. The ECC fills this need, bringing together volunteers and English language learners for 60-90 minutes of interaction.

Maier said she has seen the pleasure of watching small children grow to adulthood and families evolve. Seeing someone who once spoke no English be able to share their stories, emotions, and dreams is “magical.”

“I’ve met people who know no English and then, when they learn the language, I’ve discovered this other universe within them,” she said.

Building on the ECC’s success, the Iroquois Library also endeavors to preserve cultural traditions by offering cultural showcases, multilingual programs, world music events, and international films. These events are held back-to-back with English Conversation Club meetings and are open to the public, attracting learners, volunteers, and other residents interested in the international community. Youth are involved in the planning and execution of each event, building their own leadership skills along the way.

As a finalist, the Louisville Free Public Library’s application is now being reviewed by a national jury composed of arts and humanities field experts, with notification expected in late June. LFPL will also receive a Certificate of Excellence recognizing its finalist status.